Channel Marks, do they matter?

Only if you don’t want to hurt somebody or wreck your boat!

The correct names are Port and Starboard Laterals and they are the same everywhere around the world with the exception of American occupied countries. 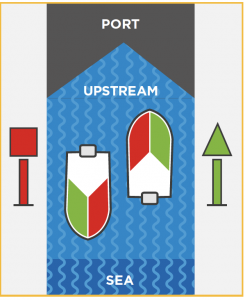 On a boat looking forward, Port (Red) is on the left and Starboard (Green) is on the right. We give way to vessels on our right hand side (our Starboard).

Port was originally called Larboard but it was confused with Starboard so Larboard became Port and Starboard remained. Starboard was called “Steerboard” because it was the side of the Viking ship that had a large steering oar and Port was renamed that because the vessel had to dock on the Port Side away from the “Steerboard”.

Channel marks are an essential navigation system to understand because if you get it wrong there is every chance you will run aground or hit some rocks. I know because it’s happened to me!

Channel Marks are named the same, and are the same colour as the sides of your boat for a reason. The simple rule is and you can remember these sayings: –

e side coming in, arse about when going out”

“Green to Red when the sea is a ahead, Green to Green when coming Upstream”

The Port or Starboard marks are usually put along the edge of a channel wherever the water is dangerously shallow so it pays to be on the correct or deepest side unless you know its OK.

Eden on the Sapphire Coast

Sailing North For The Winter